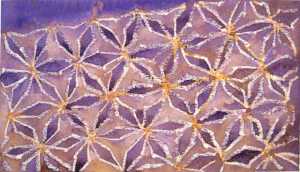 The Al Bahar towers project was a private commission for two paintings of a pair of innovative skyscrapers being erected in Abu Dhabi, designed by Aedas architects (www.aedas.com). The client had seen my paintings for the ICE (http://icepaint.wordpress.com) and wanted paintings that had a similar level of architectural detail, but which were not simply portraits of the buildings as erected.

My source material was photographic – and the first step was to paint and draw myself into the project. I did this in a series of very large (four feet by five overall) sheets of sketches which – as a homage to some of the artistic traditions of Islam – deliberately played on the idea of tiles, with repeated motifs and various types of internal symmetry. These can be seen at http://www.flickr.com/photos/meuli-art/sets/

The second sheet (http://www.flickr.com/photos/meuli-art/sets/72157626873892439/) took the idea of the mashrabiya as it was to be developed in the Al Bahar towers, and played with it decoratively, exploring treatments that ranged from strict geometry to expressive abstraction.

The final sheet (http://www.flickr.com/photos/meuli-art/sets/72157627036495072/) extended several of these ideas, with a row of sketches devoted to the modern mashrabiya, a second row to its traditional wooden antecedents, and a third row to the types of Mangrove flower which are to be found in the gulf where the towers are situated, and which have striking architectural qualities reminiscent of the flower-like shapes of the individual mahrabiya elements as designed by Aedas.

These sheets of sketches then evolved into the two large paintings – both executed in mixed media on canvas (http://www.flickr.com/photos/meuli-art/sets/72157629359703293/

They are numbered I and II, but evolved in parallel with each other. Both pick out themes from the sheets of sketches as well as developing their own vocabulary. In both paintings I am interested in depicting the creative process which underlay the design and then the construction of the buildings, so that they start from the drawings themselves and then explode outwards into three-dimensional life. They contain passages of drawing, of expressive painting and of strict geometry which all refer back to various aspects of the building and its context. The variety of techniques used is considerable, intentionally, as it symbolizes the variety of processes which are involved in the construction of the buildings.